Reports are out claiming that Real Madrid coach Zinedine Zidane was thrilled to win the Champions League final. 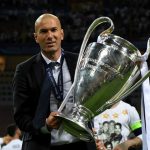 He stated: “I’m happy with everything that we’ve done together. It’s by no means easy to win the Champions League. We’ve worked hard and fought for it and I’m very happy.

“We went into the game in good shape. Towards the end we suffered physically. The players had cramps but that’s normal. Mentally, there’s a lot of pressure. You have to fight and we’ve got there by working hard. When you win something as big as the Champions League, it means a lot to the players, the coaching staff and the fans.

“Yes, I’ve dreamed about this. I’m positive. The president has given me the opportunity to coach this great club. I’ve got a phenomenal squad who have fought and worked incredibly hard. Having players with this kind of talent, you can achieve something great.”