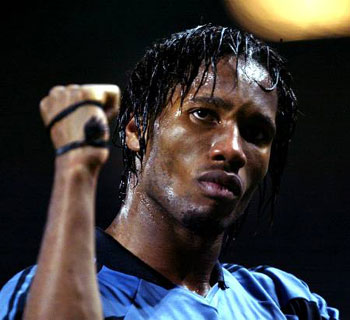 Chelsea striker Didier Drogba has revealed that he reckons up to seven teams will battle it out for the Premier League crown this season.

The Ivory Coast international striker star believes that the English Premier League has never been so competitive, with Tottenham, Manchester City and Aston Villa ready to provide a genuine challenge to the ‘Big Four’ of Chelsea, Manchester United, Liverpool and Arsenal.

On cash-rich Manchester City, who have spent big especially on their forward line this summer, Drogba just said that the club have the means.

Drogba, who has just extended his contract with Chelsea until 2012, played a key part in Chelsea’s victory over Manchester United in the Community Shield at the weekend. The Blues prevailed in a penalty shootout after the match finished 2-2 after 90 minutes.

But the striker still feels United, the reigning Premier League champions, are the ones to stop this season. We Just Have To Win Against Arsenal – Chelsea’s Fabregas