Former Ajax and Anderlecht star Jan Mulder has declared that Manchester United should’ve pushed through a deal for Hector Moreno. 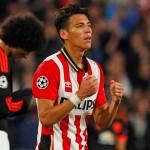 United were interested in the PSV Eindhoven defender last summer as he prepared to leave Espanyol.

“But they dawdled and allowed PSV to take him.

“He not only broke the leg of Luke Shaw, but also equalized with a header (in their Champions League clash).”