It has been reported that Dutch legend Ruud Gullit has questioned Louis van Gaal’s tactics at Manchester United. 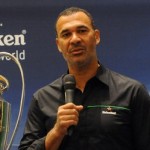 The 62 year old stuck with his 3-5-2 system for yesterday’s defeat to Swansea City.

Ex-Chelsea manager Gullit remarked: “My biggest surprise was when he played the 3-5-2 system with Holland it was a necessity because we had bad defenders.

“But at Manchester United you have to play attacking football and he adapted the game he did with the national team.

“At Ajax, Barcelona and Bayern Munich he played 4-4-3, and always attacking football and now all of a sudden he’s going to play this way.”