It has been reported that former Dutch star Ronald de Boer is worried about the form of Manchester United striker Robin van Persie. 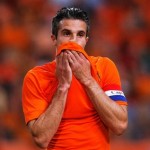 The former Arsenal striker has been amongst the goals in Holland’s World Cup tune-up games, but De Boer feels he’s not being utilized.

“Remember: Van Persie has not had a great season, he has twelve days to get fully fit for the World Cup.”