It has been reported that Manchester United hero Dwight Yorke says they should keep trying for Real Madrid star Gareth Bale. 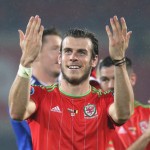 The Wales international winger has insisted he’s happy in Madrid.

“I would get Gareth Bale in,” said Yorke to The Sun.

“That’s who United need: a player who will just take the ball and run.

“He’s British, he’s exciting, he’s fast. He goes past people and that will lift everyone going forward.

“When he is in full flow, he is one of the best in the world. That’s why Madrid paid the money for him. If I was signing one player for United this summer, it would be him.”