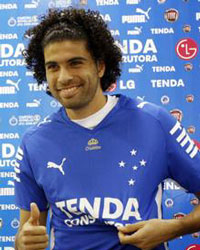 Gerson Magrao started his career at Cruzeiro and had a three-year spell at Dutch side Feyenoord before returning to Brazil.

The 24-year-old midfielder signed a two-year contract with Flamengo following a successful loan period at the club in 2007 before going out on loan to Ipatinga a month later.

In the summer of 2008, he was transferred back to Cruzeiro, before the Ukrainian side signed the midfielder.