It has been reported that Manchester United chief Ed Woodward denies their Galacticos policy will see the club’s academy shunned. 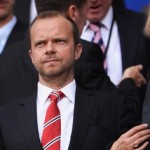 Woodward insists United are still keen to promote their own players and pointed to the emergence of Tyler Blackett, Paddy McNair, James Wilson and Andreas Pereira this season as proof.

Van Gaal has given Blackett, McNair and Pereira their first-team debuts since taking over from David Moyes, with Blackett and McNair starting eight games between them.

Saidy Janko and Reece James were also given their senior debuts in the 4-0 defeat to MK Dons in the Capital One Cup.

Woodward said: “Encouragingly, in addition to the world leading players we have acquired, our first team now includes several new players promoted from our academy, including Blackett, McNair, Pereira and Wilson.

“Youth development is a key part of the club’s DNA and we continue to invest in our academy and scouting infrastructure to attract the most talented young players.” Mourinho Confident Of Taking Charge Of Man Utd Next Season