It has been reported that Chelsea midfielder Eden Hazard has again broken down in Belgium training. 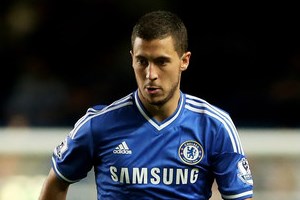 The Daily Mail revealed that Hazard has given Chelsea a major injury scare after hobbling out of Belgium’s final training session before Friday night’s World Cup qualifier against Scotland.

The 22 year old played down fears over a nagging achilles problem, claiming it was not an old injury that kept recurring and insisting he would be fit for the Hampden Park tie.

However the former Lille star now looks like missing the game after wincing in discomfort, barely 20 minutes into the session, and leaving the Hampden pitch. PSG On The Brink Of Signing Chelsea Defender David Luiz