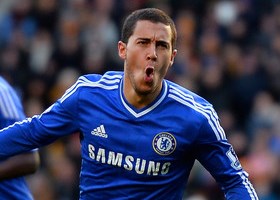 It has been reported that Chelsea winger Eden Hazard was delighted with his goalscoring performance in victory at Hull City.

The 23-year-old Belgium international is a reported target of Paris St Germain, who have the resources to tempt most clubs, but Jose Mourinho is on record as saying he would not even entertain a £100million bid.

Hazard also seems happy in his work and told BT Sport: “I am good at this club and I will keep going for a long time.

“We are young, we are in first place (at the end of the match). We are a very good team and a very young team.”

Ancelotti Adamant Chelsea Does Not Need To Buy In January

There Is No Balance In Chelsea – Michael Ballack Fabregas Insists He’s Not The Traitor Inside Chelsea Locker Room