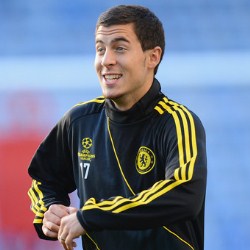 Eden Hazard has revealed that he came close to joining Tottenham.

The Chelsea star has revealed he came close to joining Tottenham but was put off by their failure to qualify for the Champions League.

The Belgium international told Tuesday’s France Football : “It’s true that Tottenham tempted me because it was a young team which was third in the league,”.

“Unfortunately, the end of the season did not go well. They did not reach the Champions League, which tipped the balance.”