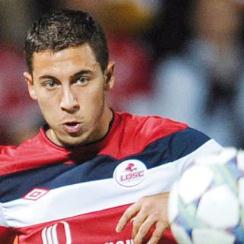 Reports have emerged that Lille star Eden Hazard has admitted that he wants a move to the Premier League.

Manchester United, Arsenal and Manchester City are all chasing the Belgium international.

After victory over PSG, Hazard declared: “My objective is to go to the Premier League, because I have had my time in France.

“I want to finish the season with Lille and then go to England.”