Reports are out claiming that Chelsea winger Eden Hazard insists Manchester City are favourites for the Premier League title because they have ‘better players’. 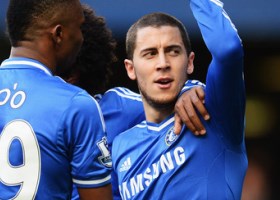 The Blues now hold a nine-point advantage City, but the Etihad Stadium outfit have three games in hand and boast a superior goal difference.

Hazard told Belgian TV station Sporting Telenet: “Manchester City will become champions if they win all of their games. But if we get the chance, we will take it.

“We have enough quality to play for first spot, but City are still favourites as they have the better players.

“It’s more difficult to be second or third with some games less as you have to win those games. We’ll see what happens at the end.

“The season is still long, I feel a bit tired, but I’m not the only one.

“If we want to win something this season, we’ll have to survive games like those against Spurs.”