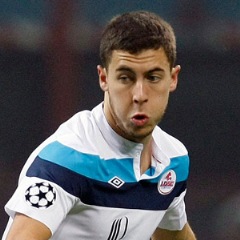 Eden Hazard is delighted Manchester United boss Sir Alex Ferguson made a personal check on him on Saturday.

Ferguson flew to France to see the Lille dazzler in action against Lyon.

“It’s a pleasure to be observed by one of the best coaches in the world, if not the best,” he said.

The 21 year old has so far played a total of 181 matches for the French side scoring a total of 41 goals and notching up 30 assists along the way.