It has been reported that Chelsea winger Eden Hazard rates Arsenal reject Gervinho among the best players he’s ever played with. 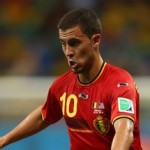 The pair played together at Lille before Gervinho left for Arsenal in a £10.8m deal.

The Belgium international followed him to the Premier League a year later to join Chelsea for £32m.

Asked the most talented player he’s played with, the Hazard told Sport magazine: “Samuel Eto’o – he’s one of the best players in the world. Obviously here Frank Lampard, JT [John Terry], with the respect they create and what they’ve gone through.

“And, in France, Gervinho – his skills with the ball are insane.”