It has been reported that Manchester City striker Edin Dzeko was delighted with victory over Newcastle United as Chelsea were held by Burnley. 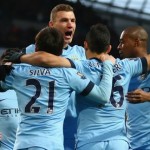 On Chelsea’s surprising draw with Burnley, Dzeko said: “Just before when we were doing our preparation (we found out). It was positive because this is the first time Chelsea have dropped a point at home this season.

“It was good for us to come into the game knowing if we won we could reduce the points and we were fantastic.”