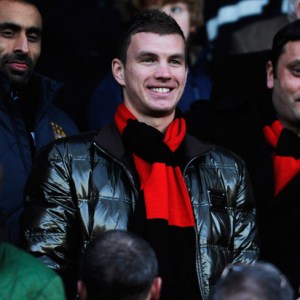 The former Wolfsburg striker was signed by the Premier League club for a staggering £27.5m and has put pen to paper on a four and a half year deal.

The 6ft 4in Bosnian international was on stands to see Manchester City play against Leicester City in their FA Cup clash which ended up 2-2.

Dzeko was given the tour around in the club and he took the opportunity to meet the staff and some of the players of Manchester City.

The striker then took part i a light training session with the players in their training ground.