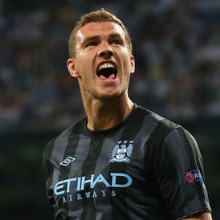 Edin Dzeko was happy to prove Manchester City’s match-winner after victory over Tottenham.

The Bosnian international striker came off the bench to net an 88th minute winner.

“It shows our character that we are strong even when we are losing. I hope next time we will be winning 1-0 and win the game because this is much harder to play.

“Again from a free-kick we conceded a goal, stupid as against Arsenal, and we have to improve there that is for sure.

“After the goal I think we played better, were the better team over 90 minutes, and at the end we deserved it.”

Asked if his efforts will have sent a message to Mancini and earned him a shot at a starting berth in the near future, Dzeko added: “Goals are my message, that is the only thing.” Sergio Aguero : I Can Learn From Roberto Mancini!