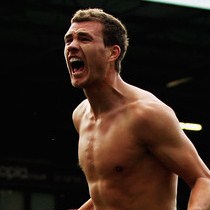 Edin Dzeko has declared that he does not want to be Manchester City’s supersub.

The 26 year old Bosnian international striker came off the bench to score twice in victory at West Bromwich Albion on Saturday.

Dzeko, who also scored the winner at Fulham as a substitute, said: “The manager (Roberto Mancini) is there to pick the team and I’m there when the team needs me.

“But I was never a super-sub even before I came to Manchester City.

“I always used to play from the beginning (for Wolfsburg) and I scored a lot of goals – not as a sub.

“In the last few games the situation has been like this and I’m just happy to be scoring goals.

“But I will never be a super-sub, I want to play.”

Fernandinho Has No Regrets Missing Out On Chelsea Move