It has been reported that Edin Dzeko is happy with his new deal with Manchester City. 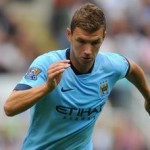 The Bosnian international striker penned a new deal which will keep him at the Etihad Stadium until at least 2018.

He told City’s website: “As far as the contract, in general I had no dilemma around an extension.

“I am happy at City, the manager believes in me, which is certainly important, and I give my all on the pitch and altogether it means quite a lot to me, because City is a club with great ambitions and I easily decided to stay put.”