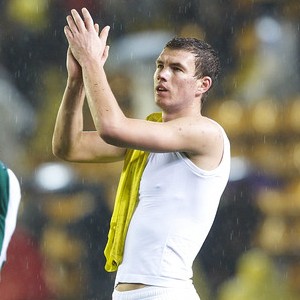 Interesting transfer news are out and it has been reported that Wolfsburg striker Edin Dzeko has invited Juventus to move for him.

According to Corriere dello Sport, the Bosnia international striker would prefer a move to Italian side Juventus over Manchester City.

Dzeko declared that : “I want Juve,”.

And a deal could be on, with Wolfsburg insisting at least €40 million for the striker.

It is believed that Juventus are willing to offer €20 million cash plus midfielder Diego in exchange for Dzeko.

Hamburg, meanwhile, have made contact with Juve GM Beppe Marotta to ask for a price for Diego.