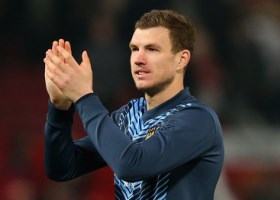 The Bosnian international scored after only 45 seconds at Old Trafford and again in the second half before Yaya Toure rubber-stamped the three points and ensured another chastening night for David Moyes’ troubled United.

City are now only three points behind leaders Chelsea and have two games in hand, but Dzeko believes the Blues, Liverpool and Arsenal will still provide serious competition over the run-in.

He told Sky Sports 1: “I think before the game we had three games less than Chelsea and this game was very important for us. Now we are only three points behind and still two games less. This game could be crucial at the end of the season. I think there are four teams that want to win the title and everyone’s got a chance. There are still eight or so games so everything’s to play for.”

Dzeko added: “I think it was an amazing game for us from the first to the last minute. We were amazing. We just wanted to start playing our game from the first minute, playing them high and trying to score an early goal, which we did. Then it was all about us.

“There could have been another one (an early goal) but we got two in the second half so we have to be happy.”