It has been reported that Manchester City striker Edin Dzeko has revealed that he is in talks over a new deal. 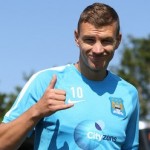 The 28-year-old Bosnia-Herzegovina striker, who scored 26 goals last season, was speaking at a press conference ahead of City’s International Champions Cup clash with Liverpool in New York on Wednesday.