It has been reported that Fulham boss Felix Magath would love to sign Manchester City striker Edin Dzeko. 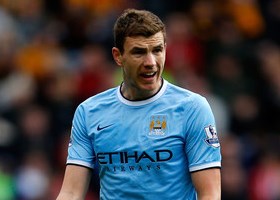 The pair worked together in Germany.

Magath, whose Fulham side will be trying to stop Dzeko scoring on Saturday, said: “Edin has a different situation here.

“He is not the only striker at Manchester City and there are a lot of very good players.

“Perhaps he should come to Fulham and he could score a lot more goals than he does at City.” Nasri Insists Man City Made Statement With Victory Over Liverpool