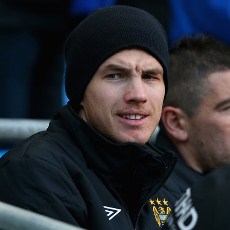 Manchester City striker Edin Dzeko has declared that he would be happy to play in the Europa League.

City need victory over Champions League opponents Borussia Dortmund to be sure of qualification for the second tier comp.

“It won’t be easy and we have a few players missing but we will do our best because everything is possible in football.”

Dzeko is familiar with Dortmund having enjoyed a prolific spell in the Bundesliga with Wolfsburg before his £27million move to City two years ago.

The 26-year-old said: “They are a fantastic team, they have shown that in the Champions League.

“They have got a young team with some experienced players.

“In the Champions League, we haven’t played like we wanted and we only have two points but I think in the league we are playing very well. We haven’t lost any games and I hope we will continue like that.

“In the Champions League there is one more game to play. We will try to win and if we can play in the Europa League that would be good for us.”