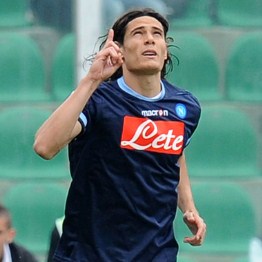 While in Rome this week, Ferguson highlighted Cavani and Napoli after rivals Manchester City were grouped with them in the Champions League.

“It’s an honor to hear Ferguson talk publicly about you. It’s true what he says about San Paulo, which gives us all a motivation that has no equal.”

Cavani added: “I am not afraid to test myself against Dzeko, Aguero, Tevez and Ibra.”