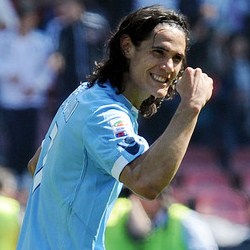 Sensational news are out and it has been reported that the agent of Napoli star Edinson Cavani has left the door open to a move to Manchester United.

United boss Sir Alex Ferguson was linked with a major offer for the Uruguay international over the weekend – which prompted Napoli president Aurelio de Laurentiis to declare his striker is worth “£89 million”.

Agent Pierpaolo Triulzi said: “His is a beautiful story. Edi hopes to spend another year like the one just concluded.

“Despite the great interest from Spain and England, he is happy to be in Naples. But in the future you never know …”