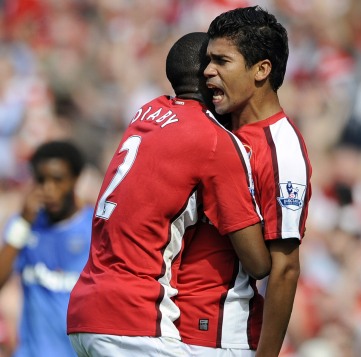 Arsenal striker Eduardo has been banned for two matches by UEFA for diving to win a penalty against Celtic in a Champions League qualifier last week.

UEFA announced on Tuesday that their control and disciplinary body had suspended the Croatian international “for deceiving the referee” and now Eduardo will miss Arsenal’s Champions League group matches away at Standard Liege on September 16 and the home match with Olympiacos on September 29.

Arsenal now have three days to lodge an appeal against the decision.

UEFA said in a statement: “The UEFA control and disciplinary body today examined the case of the Arsenal player Eduardo ‘for deceiving the referee’ during the UEFA Champions League play-off second leg match on August 26 against Celtic, and has suspended the player for two UEFA club competition matches.”

Eduardo went down midway through the first half of the Champions League qualifier despite there appearing to be no contact with Celtic goalkeeper Artur Boruc and referee Manuel Mejuto Gonzalez awarded a penalty, converted by Eduardo who was subsequently condemned by Celtic.