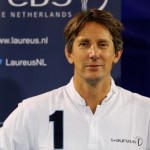 Reports are out claiming that Manchester United legend Edwin van der Sar has backed the appointment of Louis van Gaal.

The 43 year old said : “Fantastic opportunity for both United and Louis van Gaal to connect their qualities in this crazy World of football. All the best in the UK! Interesting to see which youth players he will bring through in the next years combining them with current squad and new signings.”


Arsenal, Liverpool To Do Battle For Bayern Midfielder Javi Martinez