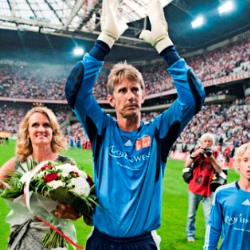 The 40-year-old, who called time on his career at the end of last season after over two decades representing Holland, Ajax, Juventus, Fulham and Manchester United, took part in two friendly matches this evening, both of which ended in victory for the veteran custodian.

He first kept a clean sheet in a 1-0 win for an 1995 Ajax side against a 1998 Holland team, Marc Overmars scoring the only goal of the game with a superb strike, before then helping his Dream Team claim a 2-1 win over a current Ajax side soon after.

Edwin’s Dream Team, which was managed by Sir Alex Ferguson and included some of his former team-mates for club and country such as Ryan Giggs, Wayne Rooney, Nemanja Vidic, Dennis Bergkamp and Dirk Kuyt, took the lead just after half-time when Louis Saha slotted in following a long ball forward from Rio Ferdinand. 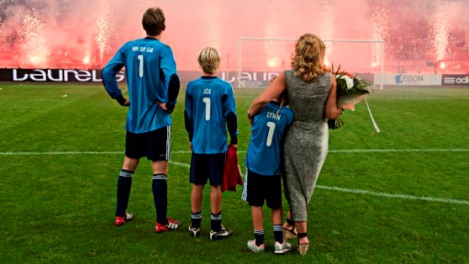