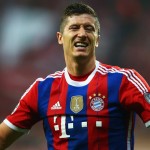 It has been reported that former Bayern Munich star Stefan Effenberg has hit out at media criticism of Robert Lewandowski.

The likes of former Liverpool star Didi Hamann has encouraged Manchester United and Arsenal to rescue the Pole from Bayern, where he is struggling for goals.

“Those who say Robert Lewandowski is struggling are wrong and have no idea about football!” barked Effenberg. “He is enormously important.

“We cannot measure Lewandowski at Bayern Munich on goals. His past record of 20, 25 goals will probably never be reached.

“But he helps his teammates Arjen Robben and Franck Ribery to enjoy so much freedom. This is an incredible value. The role that he had in Dortmund, he dos not at Bayern Munich.

“But he also has three, four world-class players playing around him.”