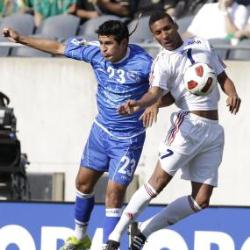 El Salvador kept their hopes of advancing to the CONCACAF Gold Cup quarter-finals alive following a 6-1 thrashing of Cuba on Sunday in their final Group A match.

Rodolfo Zelaya scored a goal in each half to lead El Salvador to their first victory of the tournament and on to four points, the same as Costa Rica who face unbeaten group leaders Mexico later on Sunday.

The two top teams in each of the three groups qualify for next week’s quarter-finals.

El Salvador took a 2-0 lead at halftime courtesy of goals from Zelaya and William Romero before Mark Blanco, Jose Alvarez Hernandez and Eliseo Quintanilla all scored in the second half.

Cuba, who had been thrashed 5-0 in both of their previous games, scored a consolation goal through Yenier Marquez in the 82nd minute.