It has been reported that Manchester City defender Eliaquim Mangala has warned Manchester United’s new signing Anthony Martial to expect to endure a difficult adjustment period as he settles into his first year of Premier League football. 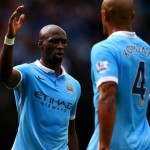 Martial became the most expensive teenager in history after the Red Devils forked out £36million the 19-year-old from Monaco.

“It is up to him to do well on the pitch,” Mangala said.

“The first season can be tough. The Premier League is a tough one – totally different and very difficult. I hope he will be well received.”

“I do not think that the amount of the transfer would be a problem.

“Obviously no one will look at him the same way anymore.

“United paid a lot of money for him. Let’s see how he and people around him like the club or his family, deals with it, that’s important. He must focus only on his football.”