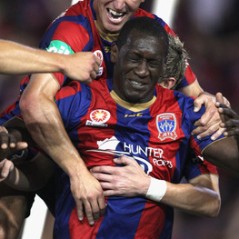 The former Liverpool, Aston Villa and England striker made it four goals in his last three appearances with a 54th minute finish from a deflected Josh Brillante cross before adding a second two minutes later when he finished with a hook over his shoulder after a goalmouth scramble.

Archie Thompson got one back for the Victory in the 71st minute but it was not enough as the Jets went top of the A-League table with their third win from four outings so far this season.

Heskey scored his first Jets goal in the 3-2 win over Sydney FC on October 13 before netting his side’s second goal as they beat Central Coast Mariners 2-1 last weekend.