Emmanuel Adebayor has made it clear that he wants Tim Sherwood to remain as manager next season. 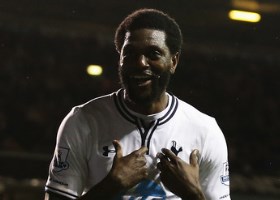 The Tottenham striker has impressed under Sherwood, scoring 10 Premier League goals in 19 outings, since Andre Villas-Boas was removed from his role in mid-December.

The former Arsenal and Manchester City star has enjoyed a new lease of life under Sherwood and is hoping the 45-year old retains his job despite reports that are linking him with a summer departure from White Hart Lane.

The Togo international told the Tottenham Journal : “Hopefully he stays, but I am not the chairman of the club so I can’t tell you anything about that,”.

“We will see what happens in the future.

“No matter where he goes, I will always keep him in my heart and I have a huge respect for him – as a manager, as a friend, as an ex-footballer, because he knows what it takes to be a footballer.

“He respects everyone equally, and for me he is a great man and a great manager.”