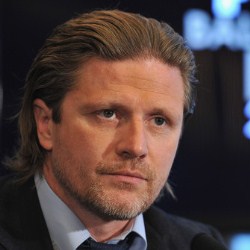 Emmanuel Petit believes that Arsenal need to cut loose some dead weight and bring in some established stars in order to get back to their glory days.

In the wake of last night’s 4-0 Champions League humiliation at the hands of AC Milan, the former French midfielder has suggested that Gunners boss Arsene Wenger needs to have a good look at his squad in the off-season and make a number of changes required to compete with the best.

Petit told www.sofoot.com : “I asked myself what has become of the team that I knew. It’s worse than I thought, they haven’t recovered from the departures of (Cesc) Fabregas (to Barcelona) and (Samir) Nasri (to Manchester City),”.

“It’s a gulf which is confirmed weekend after weekend.

“And what is perhaps the most worrying thing is the club won’t do anything this summer to reverse the trend.

“They don’t want to go back to overspending in the transfer market, and I think they’re right. But for two seasons, the level of the team has only gone down.

“You have to send out a strong signal. You have to say to (Andrey) Arshavin, and to (Tomas) Rosicky: ‘Gentlemen, thank you, but goodbye’. And soon.

“What’s needed is five or six players of real stature, great experience. Players who are 27 – 30 years old at most.

“Players with technical qualities, obviously, but also strong character. A group of guys who refuse to accept defeat, who inspire confidence in the rest of the team.”