Reports are out claiming that Arsenal legend Emmanuel Petit says they should give up on the Champions League this season. 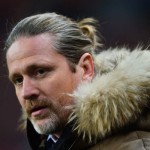 Arsenal are currently bottom of their ­Champions League group – and Petit hopes they will stay there if they fail to make the top two and qualify for the last 16.

“What they don’t want is to finish third [in the group] and go in the Europa League,” said Petit. “There is so much travel in that competition and Thursday night football.

“If they go out of the ­Champions League, better to finish last in the group. Then they can concentrate on the Premier League – which I believe they can still go on and win. “