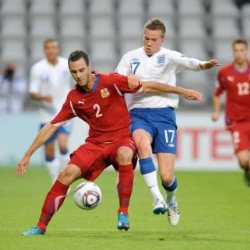 England crashed out of the European Under-21 Championships at the group stage after losing 2-1 to Czech Republic in Viborg.

Danny Welbeck’s strike with 15 minutes remaining looked as though it would be enough to send Stuart Pearce’s side through to the semi-finals despite yet another unconvincing performance in Denmark, only for substitutes Jan Chramosta and Tomas Pekhart to strike late on to join Spain in progressing from Group B.

Welbeck scored his and England’s second goal of the tournament after controlling a loose ball well on the edge of the box and playing the ball out to strike partner Daniel Sturridge. The Manchester United forward continued his run into the box and his guided Sturridge’s curling cross with a header past Czech keeper Tomas Vaclik.

It seemed as though England had been let off the hook with that goal, but they allowed themselves to capitulate in the dying moments as their bid to reach the knockout phase for the third consecutive tournament evaporated.