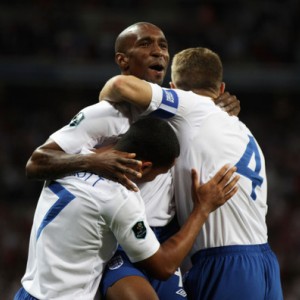 Jermain Defoe scored a hat-trick while Wayne Rooney returned to form as England hammered Bulgaria 4-0 in a Euro 2012 qualifier at Wembley.

In front of a less-than-packed home crowd and wearing a blue-tinged new kit, Defoe opened the scoring on three minutes and added a second just after the hour mark, while Adam Johnson added a late third from the bench.

Defoe sealed the rout with a spanking finish from a Rooney assist but there will be worries for Tottenham and England as he picked up an injury while scoring the third.

Rooney also assisted the first and last goals and was involved in the second as he found his mojo after a summer of despair that saw him lose form for club and country.