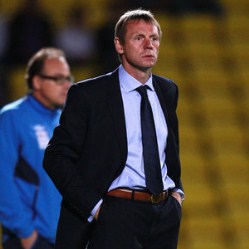 England U21 took their first step towards the next European Championship with a predictable 6-0 thrashing of Azerbaijan.

Boss Stuart Pearce claimed on Wednesday that reaching the 2013 finals in Israel would represent his toughest challenge yet but Thursday’s Group Eight opener at Vicarage Road proved the easiest of starters.

Man of the match Henri Lansbury scored twice and there was a debut brace for Craig Dawson, while new captain Jordan Henderson and substitute Martyn Waghorn also netted.

This was Pearce’s chance to banish memories of the dismal display at June’s finals in Denmark, where England failed to win a game.