England demolished a woefully weak San Marino side 8-0 on Friday as they polished their shooting boots for next week’s clash with main World Cup qualifying rivals Montenegro.
An own goal by San Marino’s Alessandro Della Valle after 12 minutes paved the way for Roy Hodgson’s side to boost their Group H goal tally with Alex Oxlade-Chamberlain, Jermain Defoe, Ashley Young and Frank Lampard all scoring before halftime. 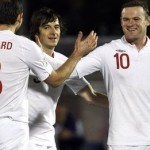 San Marino, who had lost their last 50 matches, suffered further punishment after the break in the Stadio Olimpico with Wayne Rooney bagging his 34th international goal and Daniel Sturridge his first.
In what resembled a training ground routine rather than a competitive sporting occasion, Defoe flicked in his second after 77 minutes as England racked up eight for the first time since their 1987 thrashing of Turkey.