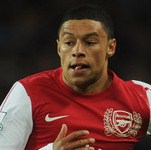 It is said that Arsene Wenger’s decision to give Oxlade-Chamberlain his full Barclays Premier League debut in the 2-1 loss to Manchester United on Sunday was backed by England boss Fabio Capello who has sent a message of encouragement to the winger after watching his display.

“The Italian was so dazzled he passed on his congratulations and challenged the 18-year-old to keep his place in the side. ”

Capello will track him leading up to next month’s friendly against Holland.