It has been revealed that Frank Lampard has praised the healthy mix of players both young and old in the England World Cup squad. 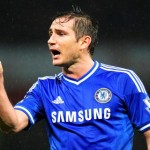 35-year old Chelsea midfielder is one of only five players above the age of 30 in Roy Hodgson’s provisional 23 for Brazil 2014 but feels there is enough experience mixed in with the youthful exuberance of the new-look playing group.

Lampard told Sky Sports News : “It’s a good squad with a mixture of youth and experience,”.

“I think we were crying out a few years ago for these young boys to come through and excite us and I think they’ve done that.

“As an experienced, older member of the squad I do enjoy having that around, it does feel good. Hopefully they play without fear and go and play well.”