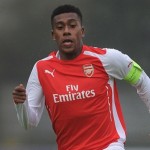 It has been reported that Arsenal youngster Alex Iwobi is at the centre of an international tug-of-war.

The Daily Mail reported that the 18-year-old – who is Nigeria legend Jay-Jay Okocha’s nephew – has been invited to attend a squad get together by the Nigerian FA.

Iwobi, who captain’s Arsenal’s Under 21 side, is highly rated at the Emirates Stadium and has already signed professional terms.

The teenager, who was born in Lagos, has represented England at Under 16, Under 17 and Under 18 level but Nigeria want to snatch the forward from under the FA’s noses. Chelsea, Arsenal To Do Battle For Schalke Midfielder Julian Draxler