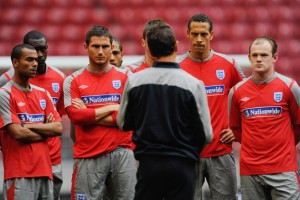 England stars are so afraid of injury that they want the upcoming friendly with Mexico be moved away from Wembley.

Local newspapers have reported that members of Fabio Capello’s 30-man provisional squad have asked for the game to be played at Old Trafford or the Emirates.

An unnamed player said: “The [Wembley] pitch is a disgrace. It’s always been bad but it is getting worse and worse.

“All the players are talking about it and nobody wants to play there. We’d much prefer a top surface like at Old Trafford or Arsenal.

“If we are not careful someone is going to get badly hurt out there. And what if it’s someone key to our chances like Wayne Rooney so close to the World Cup finals? How would that go down?”

The pitch has been replaced 11 times in two years at the £800 million stadium and has been criticised regularly by players.

Dutch Squad For The Euro2012 Qualifier Against San Marino And Finland

Yakubu : We Will Win Against Greece!