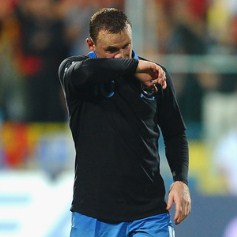 The Manchester United ace was sent off for a petulant act during England’s 2-2 draw with Montenegro in Euro2012 qualifying on Friday night and will now miss the three group stage matches at next summer’s tournament in Poland and Ukraine.

The ban is seen to be a bit harsh by some sections of the media, especially after referee Wolfgang Stark commended Rooney on the way he calmly handled the decision, but nonetheless he will now be unavailable for the opening matches of the Euros leaving Three Lions boss Fabio Capello with a massive decision on whether he even takes him or not.

However, the English FA will have the right to appeal according to a statement made by UEFA.

“The Uefa Control and Disciplinary Body has today handed down a three-match suspension to England forward Wayne Rooney following his dismissal during the Uefa Euro 2012 qualifier in Montenegro last Friday,” read the statement.

“Today’s decision was taken in relation to the red card shown to Rooney for assault after 74 minutes of England’s final Group G game, the 2-2 draw with Montenegro in Podgorica.

“The striker will now be suspended from playing in his country’s next three Uefa national competition matches for which he would be eligible.

“An appeal may be lodged against the verdict of the Uefa Control and Disciplinary Body within three days of the dispatch of the reasoned decision.”