It has been reported that England U21’s winning run has been ended by France. 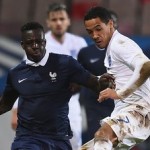 Tottenham striker Harry Kane scored against the run of play midway through the first half and added a second little more than a minute later to take his under-21s tally to eight goals in 10 appearances.

Tom Ince was the provider of both but was powerless to prevent the score becoming Tottenham 2 Arsenal 2 at Stade Francis Le Ble.

Gunners striker Yaya Sanogo pulled one back after 30 minutes and struck his second from close range before the interval.

France, a team who missed out on qualification for the Euro 2015 finals in the Czech Republic, completed their comeback as substitute Kingsley Coman struck 17 minutes from time.

It was the first defeat for Gareth Southgate’s Young Lions and England Under-21s’ first since the last European tournament in Israel in 2013 – a run of 15 games. The only blip in the meantime was a draw in Finland in September 2013.