England are without Liverpool forward Daniel Sturridge (thigh), Tottenham’s Jermain Defoe (ankle) and Manchester United midfielder Michael Carrick (hip). Wayne Rooney is likely to be joined in attack by Danny Welbeck, but Theo Walcott could feature in a central role up front at some stage. Roy Hodgson has confirmed Arsenal left-back Ashley Cole will start the match to earn his 100th cap.

Ronaldinho could start for Brazil after earning a recall for the first time in a year. QPR goalkeeper Julio Cesar is one of four Premier League players who could all feature for the visitors with David Luiz, Ramires and Oscar also available for selection. 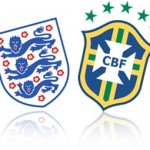 Roy Hodgson on why Steven Gerrard will captain the side despite Ashley Cole earning his 100th cap: “I don’t see any reason why the captain should let anyone else lead the team out. Ashley does his talking and work on the field and I don’t think he’s ever pushed himself forward during his 100 appearances as a potential captain of the team. I think he’s just very happy to be a key player in the team so I’m pretty certain he won’t be trying to rip the armband off Steven. If he does I might have to step in.”

Luiz Felipe Scolari on his decision to reject the England job six years ago: “Of course, it hurts. It hurts a lot because I would have loved to have been the manager of the England team. Who wouldn’t? It’s a wonderful national team. When I was invited to be national coach of England, when we sat down I still had a contract with the Portuguese national team and I was not willing to break that contract. It was my duty to fulfil it. Imagine what it would have been like when we played each other in 2006 and I had signed that contract with England. I wish all the best for the English players and their manager on their path to innovation.”

England have won just three of their 23 previous internationals against Brazil, drawing nine and losing 11.

Brazil have only won two of their 10 games against England at Wembley, however, though six of these games have ended level (two England wins).

The Three Lions are without a win in eight against Brazil (D4 L4), with Bobby Robson the last England manager to oversee a victory against them back in March 1990 (1-0, Gary Lineker with the goal).

Brazil have won 15 and lost just two of their last 18 internationals (all friendlies), with both defeats coming in the space of a week back in June 2012 against Mexico and Argentina.

England have scored at least one goal in all but one of their 31 internationals at the new Wembley, with Montenegro the only side to prevent them from scoring back in October 2010.

Neymar has scored eight goals in his last six appearances for Brazil.

Arsenal Not Interested In Selling Cesc Fabregas For A Knockdown Price