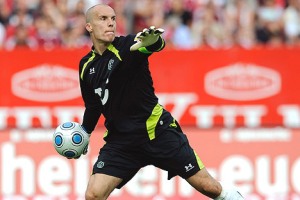 German police have discovered a suicide note written by German national keeper Robert Enke, who died after he was hit by an express train near Hanover.

Lower Saxony police spokesman Stefan Wittke confirmed that there was a farewell letter but out of respect to the family, the police will not reveal the details.

The 32-year-old Enke was hit by the train travelling at 160kph as it passed through a crossing near Hanover on its route between Hamburg and Bremen.

Police said the Hanover captain’s car, parked metres away from the tracks, was unlocked and his wallet still inside.

Meanwhile, the German football federation has called off training for Saturday’s international friendly against Chile, putting the match in doubt.

Enke won eight international caps and was in the running to play at the World Cup in South Africa next year.

After years of battling injuries and personal issues, including the death of his two-year-old daughter due to a heart ailment in 2006, and after living in the shadows of Oliver Kahn and Jens Lehmann for almost a decade, Enke finally appeared poised to grab the number one spot for the national side.

After playing for Borussia Moenchengladbach, Enke had several stints abroad, including at Benfica, Barcelona and Tenerife before returning to the Bundesliga in 2004.

Barcelona held a minute’s silence prior to their Copa del Rey match on Tuesday, while Tenerife said their players would be wearing black armbands in their Liga match at the weekend.

Hundreds of fans gathered outside Hanover’s ground and club offices on Wednesday, leaving flowers and lighting candles in Enke’s memory.

Enke is survived by his wife Teresa and an eight-month-old girl the couple adopted in May.

The German football league said a minute’s silence would be held on the next matchday, with all players wearing black armbands.

Enke’s Wife Reveals Depression As Cause Of Suicide