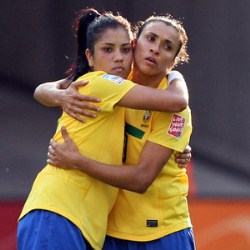 Brazil, who were already certain of their place in the next round, maintained their 100% record with a 3-0 win over Equatorial Guinea.

Brazil were nearly up after a minute when a free-kick just evaded goalkeeper Miriam’s post, but they struggled to create clear chances afterwards and the sides reached half-time without breaking the deadlock.

On 49 minutes, though, Brazil were ahead, and in some style. Erika collected the ball after a meek clearance from Miriam and juggled the ball impressively before firing expertly into the net.

Five minutes later, they doubled the advantage as Cristiane stabbed home a cross. Cristiane then completed the rout in injury time as she calmly slotted home her second goal of the game from the penalty spot.